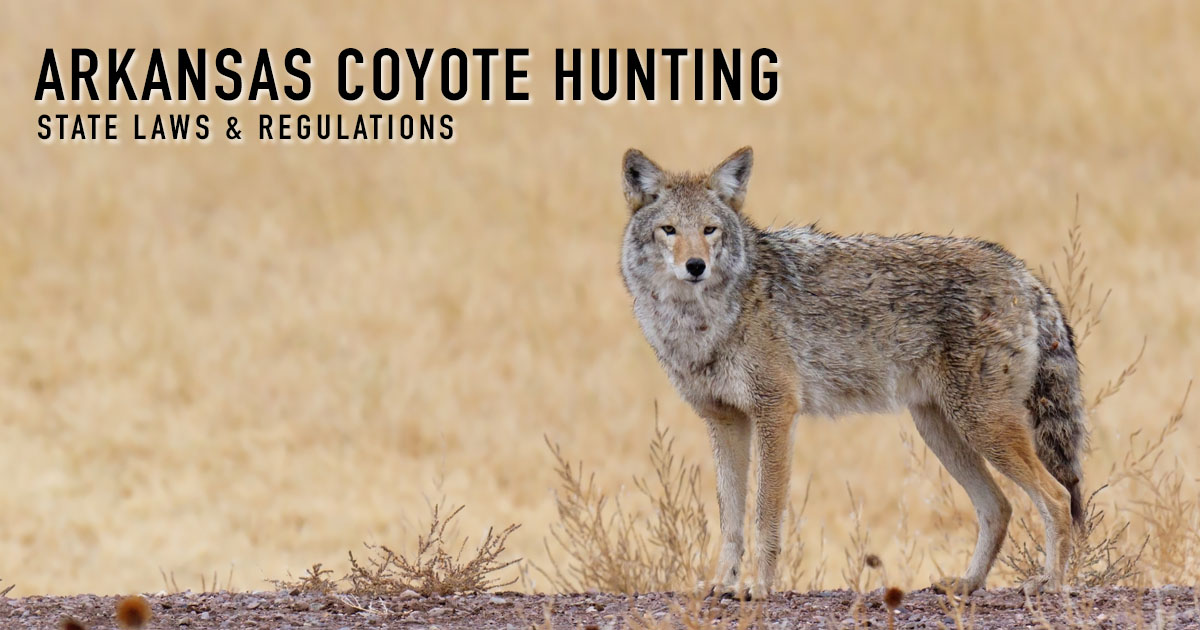 Are coyotes defined as furbearer, game animal, or other in Arkansas? Furbearer.

Do you need a license to hunt coyotes in Arkansas? Furbearer hunters and trappers 16 and older must have a valid Arkansas hunting license.

Can a non-resident hunt coyotes in Arkansas? Yes

Is there a specific season for coyotes in Arkansas? July 1st, Sunrise – February 28th, Sunset. During youth turkey hunts, only youths may take coyotes.

Is there a bag limit for coyotes in Arkansas? No limit.

What are the legal hunting hours in Arkansas? 30 Minutes Before Sunrise Until 30 Minutes After Sunset

Are decoys legal in Arkansas? Yes

What firearms are approved/disapproved for coyotes in Arkansas? Coyote may be taken with archery equipment, firearms of any caliber or shotguns with shot no larger than T shot.

Foxes, Bobcats and Coyotes may be taken during daylight hours with firearms of any caliber.

Bobcats and Coyotes also may be taken during any open deer, bear or spring turkey season with weapons legal for that season.

Are suppressors allowed in Arkansas? All game animals legal.

Legal ammunition or restrictions for coyotes in Arkansas? Coyote may be taken with archery equipment, firearms of any caliber or shotguns with shot no larger than T shot.

Are there regulations for possessing,  transporting dead coyotes, or pelts across state lines in Arkansas? Buy or sell wildlife (or their parts) except for pelts or carcasses of furbearers, squirrel tails and pelts, rabbit pelts, turkey bones, deer antlers, deer hides, elk antlers, elk hides or feathers not protected by federal regulation 50 CFR §20. For more information, refer to AGFC Code of Regulations 05.04.

It also is illegal to dispose of unused portions of game animal carcasses on cemetery property; in streams; rivers, ponds and lakes, or within 50 yards of the center line of a public road.

Is night hunting allowed in Arkansas? Day hunting only for Coyotes. Bobcats, opossums and raccoons may be taken at night only when treed by dogs and only with firearms no larger than .22 caliber rimfire and shotguns with shot no larger than T shot.

Can you hunt from a vehicle in Arkansas? You may not hunt wildlife from a moving motorized land vehicle.

Can baiting be used to hunt coyotes in Arkansas? Baiting is defined as the direct or indirect placing, exposing, depositing, distributing or scattering of salt, grain or other feed that could serve as a lure or an attraction for wildlife to, on or over any areas where hunters are attempting to take them. It is legal to feed wildlife, with these exceptions:

Can dogs be used to hunt coyotes in Arkansas? Dogs allowed except when deer seasons for that deer zone prohibit the use of dogs.

Is there a bounty program in Arkansas? Not at this time.