How to Find Coyotes, Locating, Tracking, and Coyote Scouting

Location, Location, Location! Get out there and scout your potential hunting areas. You can’t kill a coyote if they don’t live where you’re hunting. If you aren’t seeing tracks or scat, odds are you won’t have much luck. Move on to new areas, and do your best to pick up private ground by speaking politely with ranchers and other land owners. Don’t be upset if they don’t allow it, just move on to the next place. Ask Ranchers where they’ve been hearing them, they’ll know where it’s all at.

Online scouting: My greatest tool for scouting is Google Earth. Download it for free: Google Earth. You can use this to find places you can’t see from the road. Find water holes, ravines, tree groupings etc… Here is a great video by Lance Benson of Bucking the Odds.

Private ground: Help us all out and don’t hunt on private property unless you have permission. Take the time to contact the land owner, in person, if you can. Let them know you’re intentions and ask politely. If they decline, be nice and say thank you. You never know, they might change their mind based on your behavior. Be willing to help out too, fix a fence or report problems you see on the land.

Have you followed and subscribed to our channels?

County Recorder: Check online to see if your county has a digital county GIS. The county I live in does: Washington County Recorder. You can go to the county offices and get land owner information and use it to contact owners of potential hunting ground. Again be courteous!

Locating: Were not talking about howling on stand. Getting up really early in the morning and going to possible stand locations. You can use a siren sound, or howl to elicit a reaction from nearby coyotes. Competition callers win by locating coyotes! Not recommended for urban coyotes however. This is an inexpensive device to throw in the truck for locating while scouting.

Habitat: Coyotes adjust their hunting style to what foods are available. When they hunt small prey alone, they usually stalk it and then pounce. If the prey is larger like a deer, they will often hunt in small packs and work together to kill the prey. Coyotes are known for how well they adapt to different habitats. They can even be found living in and around large cities. In the Desert, coyotes can be found in all habitats from desert scrub, grasslands, foothills as well as in populated neighborhoods. 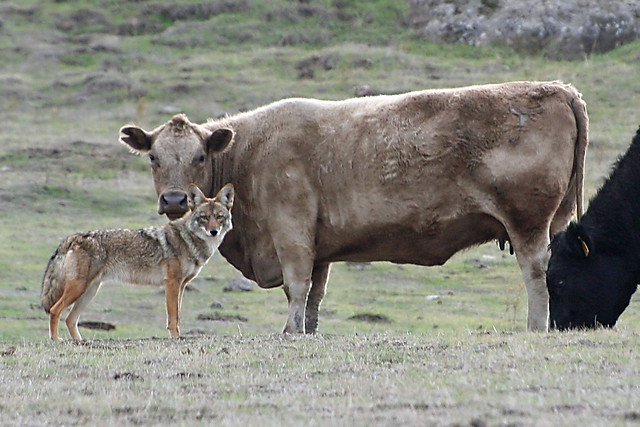 Cow Town: Coyotes often live and hunt around cattle. They occasionally try to pick off a calf, but they benefit greatly from livestock. When hungry they’ll even be seen eating a cowpie! They like to hunt for mice and rodents amongst the fields usually covered by cows. Don’t overlook areas with cattle, but make sure you are safe, don’t shoot towards a cow!

Oh Deer: Some hunters are incessant about following the deer herd, and finding coyotes. Coyotes do tend to be found around the deer. However it’s not always the case, I called in a double one time in late December at approximately 7500 feet. The deer were much lower, yet these two coyotes were finding plenty to eat even at this high elevation in the winter. If you don’t think a pair of coyotes can’t take out a deer, watch the video below.

Water Holes: Animals flourish when there is water. Coyotes need water to survive like any other animal. It would be wise to find the water sources in your area and scout it out. I plan stands all day long based around water sources. I mark them on Google Earth, then scout them, then hunt them. Good Trail Cameras are effective tools for checking the activity around water holes.

Scat & Tracks: One of the first things I learned about blank stands was the fact that I was not finding scat or fresh tracks around the area. While driving into your areas you need to be on the lookout for fresh scat and tracks. Old scat will be dry and usually start to turn white. Fresh scat is usually darker, and occasionally has flies on it (that’s a real good sign). You need to become familiar with coyote tracks. they are distinct, and appear to be narrower than a domestic dog. Canine tracks show indents from claws, cat tracks don’t show signs of claws because they retract. Little things like this will let you know if you’re near a coyote, a dog, a fox, or a bobcat.

Cover: Coyotes are defensive drivers. In other words, they are always leery of their surroundings. They pay close attention to anomilies in the area, and they usually seek to protect themselves before piling in on your caller and decoy. They tend to prefer areas with cover to protect themselves from potential danger. Videos can be deceiving, they often show a coyote out in the wide open. Coyotes aren’t prone to do this, however they often will cross an opening if it means a free meal. Mark Zepp commonly calls coyotes across ravines in his videos. Below is a preview of Free Grass No Fences showing clips of these type of stands. The videos you see might represent one out of ten coyotes actually called. It might take 40-60 stands to get the video “just right” for TV. It ain’t just whack em’ and stack em’ like you might think!

Agricultural Fields: This one should be fairly obvious. Any time a coyote can get an easy free meal, they will do it. Hunting near agricultural fields can produce like no other, pun intended. Farmers usually know where they are having problems and a good contact can put you on coyotes in a moments notice.

These are just a few samples of potential areas to scout and hunt coyotes. It’s not exclusive and only represents a small portion of ideas and areas to hunt. Post your comments below to share areas that produce for you!

Continue with the 101 Tips